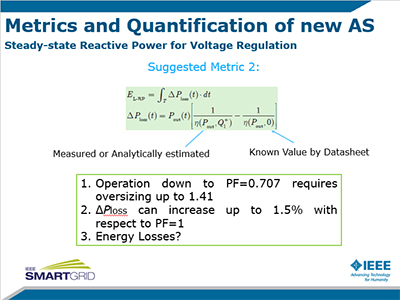 Time: 01:00:00
Part 2: The high proliferation of inverter-interfaced Distributed Renewable Energy Sources (DRES) at distribution grid level will gradually replace the conventional fuel-driven synchronous generators (SGs) at transmission system level. The inverter-interfaced DRES are mostly driven by variable-output RES such as PV or wind plants and for this reason are considered as non-dispatchable. There are DRES employing SGs directly connected to the grid which are mostly driven by biomass or small-hydro units, thereby considered as dispatchable. Although non-dispatchable, the inverter-interfaced DRES are highly controllable, thus able to provide a number of new services. DRES, particularly the inverter-interfaced ones, must urgently adopt a new more active role in the electricity networks by providing Part 2: Ancillary Services (AS) similarly to the conventional SGs and even new ones within the distribution grids in order to keep the system stability and robustness. Such AS include: inertial response, active power ramp rate control, operation in frequency sensitive mode, voltage regulation, contribution to fault clearing and harmonic mitigation. This webinar will provide suggestions on (i) how to control the DRES inverters, so that they behave as controllable SGs able to provide the aforementioned AS in a unified way; (ii) methods to aggregate frequency related AS to be offered to the transmission system; (iii) methods on the measurement and quantification of various AS, so that they are transformed from system support functions into tradable AS; (iv) methods for testing the DRES inverters with respect to the new AS. The webinar will also present the obstacles posed by current grid codes, standards or market regulations for the introduction of the new AS and provide suggestions on lifting those obstacles. It is noted that batteries, although not a conventional type of RES, are included in this webinar, since they can provide a number of the aforementioned AS either by themselves or in combination with the non-dispatchable DRES.
Tags:
Webinar IEEE Smart Grid renewable energy resources fault contribution primary frequency response Smart Grid Ancillary Services voltage regulation metrics harmonics mitigation distributed generation distribution grid DER inertia response
/content/rc/sg/en/education/live-webinars.html
https://www.ieee.org/cart/checkout/page.html